About the Divine Mother 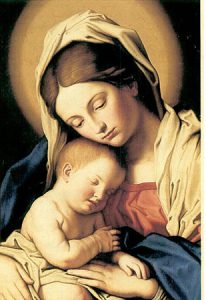 Some interesting bits of information can be gained through reading about Mary’s apparitions or appearances in the last two hundred years, such as incidences as those of Fatima or Lourdes, and the healing shrines built in those places as a result. These descriptions are revealing and especially worthy of note in that the Virgin Mother always appeared to the very simple, in the least likely places. She didn’t actually identify herself as “Mary” to these people, but by names such as “the immaculate conception,” and they assumed she was Mary.

The Mother of Jesus was singled out by God, in the words of His Messenger, Gabriel, as “blessed among women,” and “favored one.” It was not written in the Bible that she was of divine birth or different from other women as Jesus was different from men, but that she had “found favor” with the Lord and had obviously brought her vehicle to such a state of holiness as to be a fit channel to admit the body of the Lord into the earth plane. This same function is symbolic of the fact that everyone of us must become fit to bear the replica of the Christ Child within ourselves as we reach the Self.

The Bible give few examples that could be followed even in the often delightful stories of the Old Testament heroines, since their mode of life was so different, and the Hebrews were definitely male-oriented in both life and religion.

Much of woman’s rebelliousness today results from her discontent at being considered inferior to man, and given less consideration even in wages received for identical work. But in some cases women have used a negative approach to correct this situation, as so many groups have done, thus making herself less respected by demanding more respect.

It seems that the basic functions of woman apart from those which are biological have become all but lost to mankind as he has come to need less and less of what she once contributed to his culture. Most of her labors can now be done by machine or hired help and regard for women in general has been nearly lost. We will not pretend that women have been blameless, but a mutual understanding must be sought. Neither lurid sex-goddess nor dowdy, self-effacing mothers are the answer, nor are militant equality-seekers. Woman must attain a wholeness and balance, and concentrate on inner beauty, that the outer may manifest.

Eve was traditionally only one of Adam’s ribs, which was a pretty small start. Ever since that time they have been “ribbed” for their lesser strength, so had to develop an inner strength to compensate for lack of the outer. Because man could win his arguments by force, woman had to develop an amount of cunning or subtlety, in order to charm the “stronger” into giving way, when there was need. Man could be quite open and declare his mind and will with fists to back him up if need be, but force would only lose the woman her advantage, which is a more inward one, so if she must put the point across, she had to consider carefully each action and thought in order not to repulse the one whose concession must be won. Therefore, she gained a reputation for being less open, more secretive. Men quickly “blow up” and get rid of their tensions, they forget it. But women find it difficult to do this, because for thousands of years they have been considered the lesser creature, or the weaker sex, and the weaker must always find secret ways to survive.

Perhaps Eve brought all this upon woman, but Mary vindicated Eve’s lapse from grace when she lived up to all that God asked of her and bore His Divine Son, in which man’s only assignment was protector. For only the substance of Jesus’ body was human, the rest of him divine. In this God vindicated woman, and gave her grace. He restored her right to Eden, and the Tree of Life.

But woman still feels unsure of her role, for little is shown for her to emulate, except Mary’s ready acceptance of the will of God. She has not been directly taught by one who, like Jesus, was actually living the teachings, and had divine authority.

Motherhood and childbearing were at one time the most revered function of woman, when a man’s children were his hope and treasure, almost his claim to immortality. But while children are still born and treasured, it seems that man has lost the need for them, and they have accordingly lost the need for parents. Seldom do they cherish the true worth of one another. “Unwanted” children and “unwanted parents” are one of the sorrows of this time, in that they do need each other and don’t recognize it.

About a century ago, when the family was the important unit of civilization, woman became elevated for a little while to a position of high respect, and feminine virtue became highly appreciated. But there was an exaggerated sentimentality attached to “home and Mother” which became rather sticky-sweet, and had an opposite reaction eventually. Men began giving over the authority and responsibility of their homes to wives and to become less than they should be, because it was easier to get out from under, and gradually lose interest in the family, who had nothing left of the male influence but his paycheck (if he past the bar). Woman never wanted that kind of authority; nor even to be “boss” in her life with men, but to share life on equal terms as man has never seemed to understand.

We hope in this Age to balance the scales so man and woman may stand at equal height, not as identical beings, but each functioning to capacity. What we want to know now is, what can woman look up to? There’s little she can look back to, at least in the Scriptures. There have been many wonderful women in history whose biographies might be read for inspiration. Dedicated persons or unusually gifted beings are always a source of inspiration to read about. Perhaps further back in unwritten history was a female avatar to whom they could look if they knew. This lack of written information impels us to look within, to the Source.

We know that God in One, above the realm of any physical connotation of male or female, yet including them both. So if God began to manifest more of the Father aspect to bring about the creation of universe, dare we assume that the other half of His Being was lost or forgotten?

Even in mind, in the realm of the Abstract, there is the aspect of giving and receiving, or the active and reactive. If God said “let there be…,” was there not another part of Him that accepted His Word and moved to refashion the primal substance that it might truly be? If God’s Word flashed out in Glory and Power, to what did it accrue, and what great Intelligence matched His own to nourish His Creation into fullness of growth and expression?

If you will contemplate, you will become aware of the Great Presence of the Divine Mother. I would not restrict her name to Mary, because even if Mary was a divine incarnation, her eternal name in the heaven would probably not be that. But try to take a glimpse of Her, and you will know that She goes beyond human incarnation and that she rules over all the processes of Nature while transcending them, for she is equally at home in the heavens. You would receive an impression of great beauty, wonderful presence, and ever-ready compassion and love, of a sort of brooding, over-all Presence that is everywhere, as God is everywhere. Yet she cannot be separate from God, or else God would be incomplete. Here is a rhyme for contemplation:

Our Heavenly Mother has fashioned a glorious gown of sheer fabric, drawn from the depths of a blue evening sky.
and traced on it dimly-lined fables and myths of renown
known to angels and gods, but unglimpsed by the rude human eye.

More lustrous and fine than the filmiest ethers of Space
interweave storied threads spun far out beyond Time’s mighty span, where beauty of Cosmic Symbology bids Mind retrace God’s blueprint for creature or angel, for gods or for man.

Her gown flows as Seas wherein bright stars and planets are wrought, island Earth, and the myriad Lights that so far away swirl, and flash with her every soft movement and turning of thought- starry jewels of the Wise which both future and present unfurl.

A moon-silver pendant by night commends gently her grace; day crowns her with Sun, and wraps ermine clouds softly around.  The other lights dimming beside her warm radiant face, as Soul of all things, in Remembrance She all doth surround.