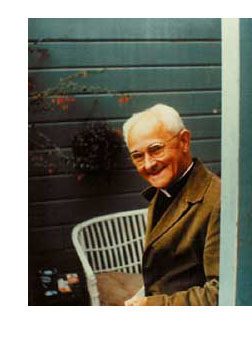 The Science of Man (SOM) is about 80 years old as an idea but 60 years old as a chartered organization. The Reverend Earl W. Blighton began developing the idea in 1930, when he reports he had a Divine revelation in which he was told to work for “the uniting of science and the teachings of our Lord Jesus Christ.”

Dr. Blighton, who had been an electrical engineer before he became a clergyman, worked with several others on development of SOM’s concept until 1960, when he called together a group of 14 men and women representing various lay professions as well as the clergy “to take an honest look at the needs of mankind and determine what could most effectively help the world after almost 2,000 years of dogmatism.”

“For four to five months,” Dr. Blighton said, “we met two or three times a week in San Francisco, more often than not into the wee hours of the morning, discussing the many phases of life and the existing functions of the approaches of life by the Christian and Eastern churches, both mystical and occult.”

“We knew that it had to be through the teachings of the Lord Jesus Christ, as well as the Ancient Teachings, because we knew that the Bible would have to be the handbook of man in the existing age.”

Out of the discussions evolved a church structure, the non-sectarian Science of Man Church in San Francisco. The organizational group remained very small and the SOM received its official state charter in 1961. Dr. Blighton performed the work of the church teaching, preaching and on the outside, working mostly with parolees and probationers.

A few years later, the Science of Man Church opened a prayer shrine, which people from the street might enter for quiet meditation or to receive counseling. Those who were hungry were to be fed in a nearby restaurant. For the first three months, very few people entered the shrine; after that people seeking help crowded it day and night. The Science of Man entered a new cycle as Helen Blighton joined with Dr. Blighton in this spiritual endeavor. Their students spontaneously began using the terms “Father” and “Mother”, and they came to be known by their students as Father Paul and Mother Ruth.

Young people from San Francisco’s Tenderloin volunteered to help the Science of Man Church, and a few older men and women joined the young people. A brotherhood began forming inside the church, and members of the brotherhood went on street patrols, making themselves available to anybody needing help. They transported the sick and injured to hospitals, found shelter for the homeless and gave food and clothing to the needy at an aid station established at the time. As the Brotherhood grew, certain members requested a more monastic way of life. In 1968, Father Paul agreed with their wish to organize the Brotherhood into the Holy Order of MANS, and the Science of Man was placed on hold. The Holy Order of Mans grew into an international organization with sisters and brothers throughout the United States (with at least one center in every state) and overseas.  For more on the growth of the Holy Order of Mans and its service projects, see our page about Father Paul and Mother Ruth.

In 1974, Father Paul went through transition and subsequent to his departure, though the Holy Order of Mans continued to grow for awhile, its numbers began a gradual decline and the order was dissolved around 1986.

In time a few members led by Mother Ruth reactivated the work of the original Science of Man, beginning in Oregon. The Science of Man continues to perpetuate the teachings of Dr. Blighton and endeavors to work towards the purpose of helping to “unfold a more thorough understanding of the Universal Laws of the Creator, so that all might better manifest His Creation and thus promote Peace and Harmony among people everywhere.”

Anyone interested in the teachings of the Science of Man may learn more by reading The Middle Path, a compilation of excerpts from classes taught by Father Paul arranged into topics, and The Golden Force, an introduction to mystical Christianity and working with the Christ Light within you. The Discipleship Program is a study course offered via e-mail or regular mail, and includes contemplation of the New Testament complemented by the Tree of Life lessons and The Golden Force.